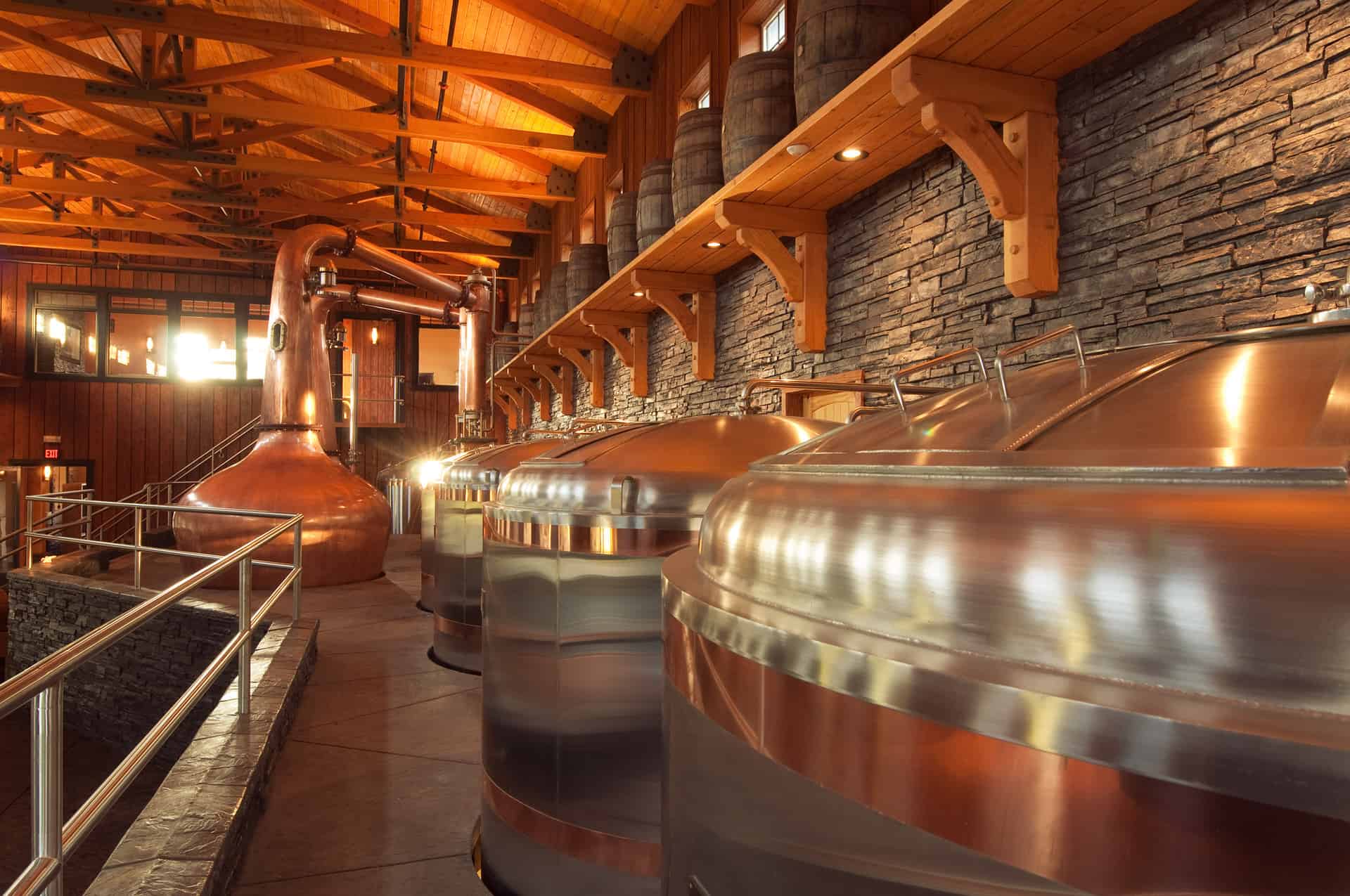 At Shelter Point, we are distilling and bottling some of the most exciting single malt whiskies made anywhere. For the last decade, our 100% Canadian take on single malt whisky has been a game-changer, raising eyebrows and glasses while winning accolades and the respect and admiration of some of the world’s leading whisky writers and aficionados.

Our sole focus is on the execution of the finest expressions of single malt whisky for you to enjoy. Only the highest quality Canadian two-row barley, grown in British Columbia, is selected for malting. We employ a traditional approach: slow fermentations and double-distillation produce a new-make spirit full of flavour, ready for maturation in an array of woods selected from around the world for their unique flavour specialties. Sitting on the edge of the ocean in our unique setting in northern Vancouver Island, the spirit interacts with the elements as much as with the wood. Brought together after years of aging for a long period of maturation in our solera system the outcome is uniquely spectacular single malt whisky. Distinctly Vancouver Island. Uniquely Shelter Point.

We are proud to be featured in leading whisky publications and distillery guides from around the globe, and of the loyal following we’ve built. To learn more, or shop our whiskies, click here.

Built in 2011, the distillery features a curated selection of equipment handpicked to produce the highest-quality whisky, including wash and spirit copper pot stills made by Forsyths, a mash-lauter and stainless washbacks made locally by an artisan fabricator on Vancouver Island. Spearheaded by head distiller James Marinus, the distillery is housed in an 8,000 square-foot building that took three years to build, created to celebrate the connection between the distillery, coastal setting and rich farming roots. The barn-style building integrates with the best of our surrounding natural elements, with wooden beams, paneling and finishings made with lumber sourced from the surrounding woodlands, as well as locally sourced stonework.

Located on the coast in northern Vancouver Island, the distillery has become a destination not only just for fine whisky but also for the spectacular setting and onsite experience. Whisky lovers enjoy being surrounded by a natural mosaic of streams, wetlands, fields, and native wildlife. Throughout the distillery, artwork pays tribute to the natural surroundings, with paintings by family member Meghan Evans, photography of the native wildlife by local Lee Simmons, and large, glass-etched windows depicting the traditional whisky making process by local artist Rob Lundquist. 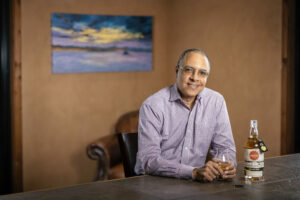 Stephen Goodridge has been immersed in the beverage alcohol industry for over three decades. After completing his training in the UK, his career started in brewing and rum distilling in Barbados. Subsequently, Stephen worked for twelve years as Vice President of Liquid Innovation and Quality at Mark Anthony Group, where he led the development from conception to commercialisation of new-to-world refreshment beverages and beer. When British Columbia’s liquor laws changed in 2013, he dove eagerly into the next challenge as an entrepreneur – producing his own liquor.
In 2014, Stephen founded Goodridge & Williams Distilling, an award-winning craft distillery that produced two vodkas, gin, and a barrel-rested spirit. After working briefly at Labatt as Innovation Lead, where he managed the development of new cider and refreshments beverages, Stephen co-founded Christopher Michael Brands Inc., a ready-to-drink business based in the US. In January 2022 he was offered the position of general manager at Shelter Point Distillery, which he embraced enthusiastically.

Now, Stephen leads a team committed to elevating Vancouver Island’s reputation as a region for premium single malt whisky production. He is particularly proud of the distillery’s bar-setting single malt, and eager to spread awareness of Shelter Point Distillery as a must-visit destination for anyone who appreciates well-made single malt whisky. In his spare time, Stephen listens to vintage records, plays the piano, and enjoys wandering around the golf course with a bag of clubs.

James Marinus has spent over 35 years farming on Vancouver Island, and is intimately familiar with the local terroir, climate patterns and other nuances that influence the taste of whisky and other spirits.

Alongside his longtime farming colleague, Patrick Evans, James was instrumental in building Shelter Point Distillery. Keenly interested in architecture, he took particular care in designing the seaside space, making use of local products, Canadian equipment and onsite timber. By travelling to whisky-making regions around the world, James learned the methods required to produce high-quality spirits. He and Patrick sourced stills from Forsyth, Scotland, and designed the rest of the process in traditional fashion with the help of a local artisan fabricator. The duo combined their quality barley with pristine water from a glacier-fed aquifer, and Shelter Point’s distinctive single-malt whisky was born.

Upon commissioning, James studied and perfected the art of whisky-making under the guidance of a retired Scottish master distiller. Today, as Head Distiller, James oversees the end-to-end production process, from mashing and fermentation to distilling. He makes the cuts himself, using the judgment of his nose and seasoned palate. Proud of Shelter Point’s evolution into an acclaimed distillery, James eagerly awaits the day the team can release a 30- or 40-year-old whisky. 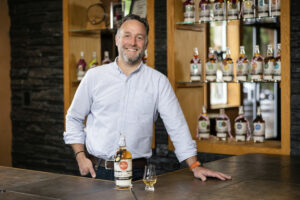 As Brand Experience Manager for Shelter Point Distillery Chris Read is responsible for sharing the company’s story. He oversees the customer experience at the distillery including tours and tastings.

Chris provides Masterclasses on Shelter Point whiskies and Tastings at events, and he likes nothing more than introducing people to our award winning whiskies and sharing the story of how they are made. He also manages the company’s social media and media interactions.

Chris has a background in communication and stakeholder engagement. He is proud to work with a team that is passionate about crafting high quality single malt that has an intimate relationship with its surrounding location and is eager to support Shelter Point’s evolution into a brand that’s globally recognized for top-quality single malt.

During his free time, Chris likes to explore Vancouver Island with his family – his favourite activities are skiing in winter at nearby Mount Washington, and mountain biking and paddleboarding in summer.

Jacob Wiebe is a longstanding member of the Shelter Point Distillery family. Over the years, he has supported every aspect of the business, including farming, sales and retail, distilling, leading industry tastings, representing the distillery at public speaking events, filling casks and liaising with customers.

In his role of Operations Manager, Jacob manages the distillery’s day-to-day operations and supply chain, from procurement and sourcing through to bottling and delivery logistics. He is also responsible for cask selection and preparing new vattings for the internal panel. Jacob also enjoys representing the distillery at industry events, and is proud of the distillery’s myriad of awards, including multiple-year “Best in Canada” honours by the Canadian Whisky Awards for Shelter Point’s single malt whisky.

Jacob looks forward to the distillery growing into a global representative of premium Canadian single malt whisky – a journey that is already well underway. In his spare time, he likes to golf, play hockey, and spend time with his children.

In 2005, Patrick Evans, a third generation farmer, whose family were turn of the 20th century pioneers in B.C.’s Comox Valley, purchased 380 acres of farmland encompassing incredible oceanfront, a natural mosaic of streams, wetlands, forests and fields – with a vision where farming could coexist with wildlife, humans and commerce. To enhance his vision, he founded Shelter Point Distillery in 2011 as a commercial vocation for barley grown on the farm. His passion for farming and quality quickly led to the whisky outcome for which we are now known.

We pay homage to his vision and continue to build upon the foundation he built. Today, Shelter Point is owned by another Vancouver Island success story, Nelson Investments, who continue the focus on producing single malt of the highest quality for consumers around the world to enjoy.