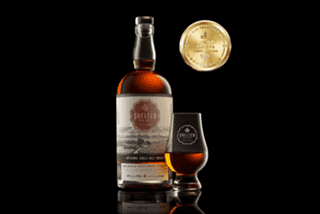 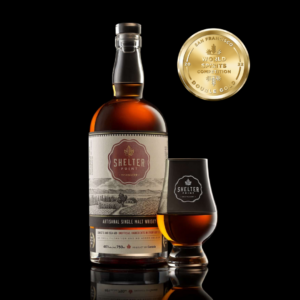 Vancouver Island’s Shelter Point Distillery has won two awards at the 2022 San Francisco World Spirits Competition, the oldest and largest spirits competition in the world. The distillery’s Single Malt and Smoke Point Whisky were each awarded a Double Gold medal – a coveted accolade that honours the finest products in the world.

One of the most prestigious and respected spirits competitions, the San Francisco World Spirits Competition is judged by renowned food and beverage experts. After entering these two whiskies in the competition for the first time, Shelter Point Distillery won two Double Gold medals in the 2022 awards, which are rare and only awarded to entries that receive a Gold medal rating by every member of the judging panel. Double Gold medals commemorate the very finest spirits in the world and mark the competition’s highest honour.

“This is the first year Shelter Point Distillery has entered the San Francisco World Spirits Competition, and to win two Double Gold medals is an exceptional milestone,” said Stephen Goodridge, General Manager of Shelter Point Distillery. “It is a testament to the quality of the whisky being distilled and bottled here, and we are thrilled as a Canadian distillery to have our single malts internationally recognized as some of the finest whiskies in the world. This win isn’t just for us – it’s for the entire Campbell River and Vancouver Island community.” 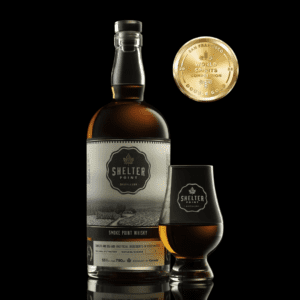 Shelter Point Distillery’s whiskies start with only the highest quality Canadian two-row barley, grown on the estate and sourced from top B.C. producers. The team employ a traditional approach, including slow fermentation and double-distillation, to produce the finest expressions of whisky. Each spirit is infused with natural glacier-fed water supplied by an aquifer, then aged within a few hundred yards of the Pacific Ocean in an array of wood casks selected from around the world, imparting distinctive character, complexity and flavours.